The price of beef in New Brunswick is at an all-time high, jumping more than six per cent in June, according to the latest data from Statistics Canada.

The price of New Brunswick beef has been increasing for months. The price to consumers is now up 50 per cent over the last 18 months.

That’s a sharper increase than anywhere else in Canada, except Prince Edward Island. 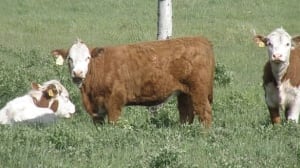 Beef prices are soaring and drought and increasing U.S demand are to blame (Submitted by Darci Anderson)

Wolpin said the price increase can be blamed on drought and demand from the United States.

However, the news isn’t bad for cattle producers in New Brunswick.

Cedric MacLeod, the chair of the New Brunswick Cattle Producers, said farmers are seeing an increase to their bottom line.

“We have one of the more aging populations of farmers so we’ve got two dynamics. A lack of supply across the country, which is driving prices up and an aging workforce in the beef industry,” MacLeod said.

“They’re taking a look at these high prices and saying this is a good chance for me to exit the industry.”

The good news for people who still want to grill this summer is that the price of pork dropped in June, poultry and lamb is holding steady.